A few years ago we were kindly bought a gazebo for our group from 2013's large Tidy Towns Grant which would help us if we had stalls or if we wanted to set up a stand on the LNR or elsewhere. Unfortunately it was a cheap Draper gazebo (If £150 is cheap) and the first time we properly used it at the Henllys Village Fete it was a windy day and it broke. This is a perfect example of the old saying "Buy cheap, buy twice". The frame was non-repairable and now we have a mangled gazebo which we hope we can recycle at least the metal, but certainly some will be going to landfill.

When we knew we were going to get a logo we applied to Big Lottery Wales to their #CelebrateWales grant pot and asked if some of the award could go towards buying a sturdy gazebo which will last longer than one event. I'd seen some good sturdy gazebo's at the Community Farm and decided to put a Gala Tent Gazebo into the application. When we heard we were successful, we waited until we got all the logo formats back and then placed an order for the sturdiest aluminium frame gazebo they stock with branding on the roof, two internal walls and one external wall panel.

We opened the box today and the quality of the gazebo appears to be brilliant with an improved bag design over the one which I had previously seen. This was very interesting as it shows the company has listened to customer feedback and made alterations. It was great to also know that we have purchased something which has been proudly designed and built in Britain. They are easy enough to find online at www.galatent.co.uk.

We'll set it up properly in the next couple of weeks and will add more pictures in an update. 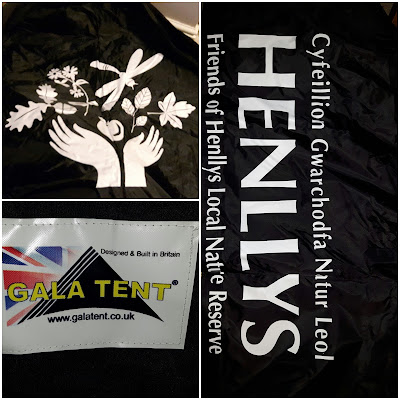 Posted by Friends of Henllys LNR at 17:27