Due to the CoVID-19 outbreak, several projects planned for Henllys LNR this spring and summer have had to be abandoned or postponed. However, the Henllys COVID-19 support Group gave me a chance to think about what we could do together even though we are all at home apart from each other.  from From this, the Henllys LNR Home Wildflower project was born. So far 45 different families across the area have come together to take part in transforming part of their gardens into native wildflower havens.
https://drive.google.com/open?id=19ihKs7BVbuyiE4zAyMeYB9QUi39qla52&usp=sharingI created a downloadable introductory document which helps local residents to understand what we are trying to do and contains all the recording sheets and guidance on what photos to take.

With help from Sammy Gawler, a local teacher, we have created a wildflower detectives series of activities to entertain and educate children at home. This work will also provide data which will be analysed by local children.

Finally, I created a "how to" document, which details how residents sow their native wildflower seeds. I also created a short practical demonstration on the principles of transforming areas of lawn into a wildflower meadow.


How to sow a wildflower area; an applied practical demonstration

Same strip in June 2019 from above

You can view some of the wildflower areas across the project on the Facebook page here: https://www.facebook.com/groups/HenllysHomeWildflowerGroup
Posted by Friends of Henllys LNR at 11:23 No comments:

I’m afraid we’ve stopped updating the blog in favour of a more local targeted social media platform using Facebook. https://www.facebook.com/groups/FriendsofHenllysLNR/ To join, you just need to answer the 3 questions so we can verify your request.

Chris
Posted by Friends of Henllys LNR at 05:47 No comments:

Rain, pave, wash away, leaves have gone and blocked the drain

It can't have escaped your notice that we've had some pretty bad weather recently with the fallout of two storms, bringing heavy wind and prolonged rainfall and all this water has to go somewhere. In the face of an ever increasing drive to build new houses and a growing trend to pave over front gardens for extra car space (and less maintenance) less water is soaking into the ground and is taken away through drains. These drains enter into man-made channels:


Where these channels end, the water enters old streams and they simply can't cope with the increased volumes of water often resulting in large erosion issues. This is one of the reasons why we have put so much effort into protecting stream banks with our wooden bundles made from harvested willow from the LNR. These fill up with silt and work brilliantly.
A big problem starts to happen with massive downpours, which is compounded by the heavy winds breaking off lager branches all accelerating natural autumnal leaf fall. Larger branches and twigs get washed and trapped against the metal grills of man made culverts, which make a kind of nest which gets lined with all the leaves, which cloggs up the flow of water. When this happens, the water levels back up , rise and even greater erosion and flooding occurs.
Luckily, there is a department within Torfaen Council who have responsibility for drainage. However, it isn't just culverts they look after, it is also all the drains on all the roads in the county. It doesn't take too many autumnal leaves to block these drains, resulting in localised flooding. It is impossible for these teams to be everywhere all of the time and in fact a dog walker told me this evening that they were out cleaning the culverts on the LNR only last week. To help out and from time to time, we get out our muck rakes as volunteers and help to clear out the culverts which pass through Henllys LNR. Today was one of those days, in the pouring rain.
At the minute, the whole LNR is saturated and the ponds are full. There is surface water everywhere and the streams are all raging. The desire lines are all marshy (apart from on our Gwent High Sheriff's Community Fund path) and the water is just finding its own way down to the lowest point. I came across this really interesting rutted stream where the water just flows its way down off the main meadow and then disappears down a hole. This looks cool, but I don't know if it is washing the bank away creating a potential hazard. Only time will tell. This little stream only came about as a result of LNR users walking along a desire line on the main meadow and the water will always take the easiest route.

As a final word of caution, if you are visiting the LNR, bring your wellies (and a buoyancy aid).

Posted by Friends of Henllys LNR at 06:23 No comments:

Himalayan balsam, not so quick summary of our findings with data from 2014-17

As a young(ish), naïve(ish) volunteer in the early days of The Friends of Henllys Local Nature Reserve, I started looking at tackling Himalayan balsam.

Many parts of England and Wales have this invasive non-native plant, not just along riverbanks where they take over, but also in woodlands, meadows and pond margins. These become dominant and outcompete almost all native vegetation in these areas, resulting in a huge loss of biodiversity.
--------------------------------
Interlude.
I got into an interesting discussion with a couple of people who think this plant should be left alone and in 30 years it will die away leaving new opportunities for other plants. They also suggest that they are better suited to our changing climate. I strongly disagree with their ideas as a catastrophic loss of plant biodiversity would be lost in the process. From 2009, Himalayan balsam has encroached into every habitat on our Local Nature Reserve. All these habitats would be stripped of ground flora which would be replaced by a mono-culture. Mono-cultures are very risky things. go ask a forestry professional about the impacts of covering so much of the UK in larch in hindsight of the recent devastating disease. Resilience to change comes through diversity. You may get lucky by putting all your chips on Himalayan balsam on the Earth roulette, but I think it is better to spread the risk across almost all flora.
--------------------------------

There are some great efforts to try and tackle this plant across the UK, but unless a more holistic approach is taken, you will never get rid of this plant. Realistically, this means starting at the head of water courses and working your way down. The photo above, did not remove Himalayan balsam forever, we've been picking this patch each year since 2010. In recent years, we have been going upstream of the Nature Reserve and tackling it there. This needs to happen everywhere in a coordinated way if there is any chance of success and to avoid wasted efforts of the past. For a larger watercourse, say the Taff, this means starting in Brecon and systematically moving your way down, or getting an awful lot of people to tackle it in a coordinated fashion. Will that work alone as a one off event? No. Himalayan balsam germinates as early as April and last year I found some in November. This means going back over the same sites over a full season of growth.

That leads to an important question of how many seasons would you need to do this for?

In 2013, thanks to a Welsh Government-funded Tidy Towns project awarded to Torfaen County Borough Council on the back of our volunteering work, large new areas of Henllys Local Nature Reserve became accessible. On top of this we were also getting some of the other areas where Himalayan was already being treated more under control. In one new patch in 2014, we found an area which was completely dominated by Himalayan balsam. You couldn't see more than 30 cm into this area. We tackled this and removed all of the balsam. In both 2015 and 2016, there was no visible difference to the density and abundance of Himalayan balsam before we again removed all of it. In 2017, however, the density was hugely reduced. 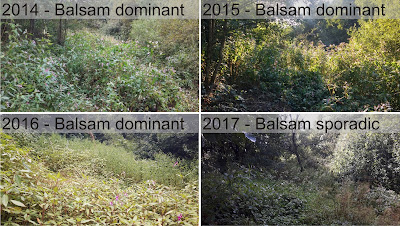 From this we think it takes 3 years to see a significant decrease in the seed bank. Seeds have a natural viability in the soil and after that they will rot. I imagine that work in this area needs to be followed up for the next 2 years. So 5 years of work altogether. So to do this on a larger scale would need an enormous resource of funding for 5 years to deliver.

The table below shows the effort our group has put into (and adjacent to) the LNR to clear Himalayan balsam over the last 4 seasons. We still have around 10 hours to clear what is left on the LNR in 2017, but we tackled the same area which we did in 2016. This backs up what we have been seeing this year.


Problems?
If we started in 2009, how come we are still spending so much time on it in 2017? Early on, we didn't get to tackle the whole Local Nature Reserve and that was before we considered the possibility of  seeding of our cleared areas from upstream. This will also be true of any other watercourse. I have seen tributary banks rammed full of Himalayan balsam, a Welsh Water sewage treatment plant in Cilfynydd totally overgrown with Himalayan balsam. I imagine lots of feeder streams are also in privately owned land and all of it needs to be sorted out in order to properly tackle this plant.

The costs do to this properly would be enormous. I can see why many people put their head into the sand (or soil) and say they can't/wont deal with it, and by general inaction by authorities the situation is going to get much worse. For us, I'm very pleased we haven't had our head in the sand and continue to be so proactive and make those inroads.

One thing is for sure, it'll be very interesting to revisit and comment on this article in 8 years time.
Posted by Friends of Henllys LNR at 11:41 No comments: