Eight volunteers from Welsh Government with support from two of our volunteers and a member of staff from Keep Wales Tidy worked all day moving some of our second 16 tonnes of limestone to further shore up our eroded bank.

Last May, we had a group from Barclays and one from Welsh Government come down, with a noble effort afterwards by ourselves and moved 16 tonnes to this site. You can refresh yourselves here and here.

When we did this last year it was really hot and really hard work because of this. However, doing the same thing in January provides extra challenges. Most likely these would be, frozen ground or muddy ground with air conditions of cold or cold and wet. When the day came around it was cold, drizzly and very muddy.

A few days earlier Brian and I set up the rubble chutes which was the easy part. 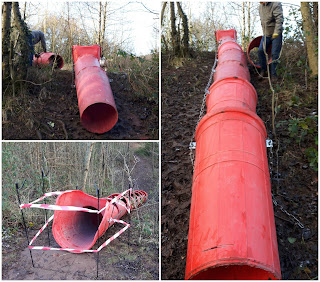 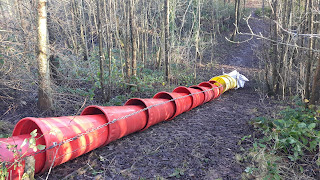 The hard part is the stone moving as can be seen from the assault course map below. 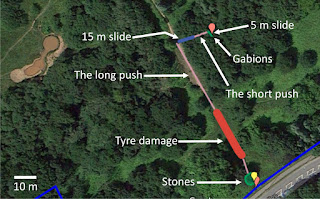 After loading up the barrow, the stone is pushed 40 metres down along a very muddy path churned by feet and barrow until the hard path which feels like bliss. There is then a short steep hill to navigate down followed by a short flat push to the top of the chutes. The stones are then unloaded, and after the go ahead is given by the team at the bottom the stones are thrown down the chute. These are collected in a tonne bag filled with old torn tonne bags to absorb the stone's impact. These are emptied into a barrow and taken down the short push to where the gabions are waiting.

The position we were at is shown below with the bottom row fully back filled behind and a top row of 3 gabions partially filled. 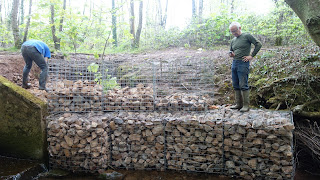 The enthusiastic team from Welsh Government were given a briefing of the work and with a volunteer from the Friends at the top and bottom of the chute set to work. This started with a tongue in cheek ceremonial cutting of the ribbon/ safety tape. 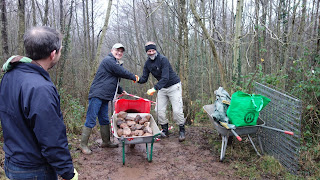 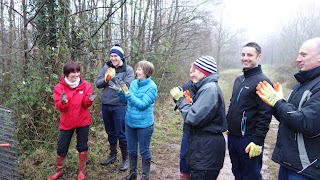 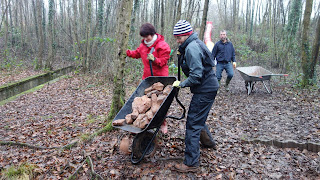 Very quickly it was clear that they were great problem solvers and rearranged their plans with 3 barrows at the top, 3 at the bottom with an extra person wiring up the final gabion. Although the path was much muddier than last May, the cooler temperature made the work a little easier. 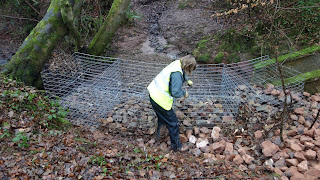 It was decided after last May that the height of the top row would be shortened by 2 x rows to preserve some of the views of the stream. While the stones were being barrowed down the hill to the gabions, these top two rows were cut off with wire cutters after removing the clips of the lid. 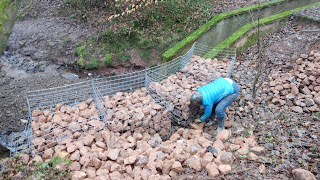 The group worked really hard after lunch and finished with everyone having a look at the results of their hard work. 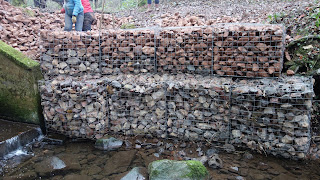 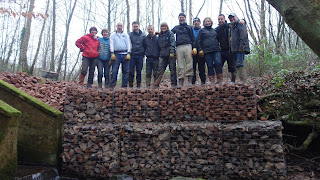 What a great effort in difficult conditions. They all had a great day giving up a day to help out with our community work. There were two fitness monitors at work during the day, one saying 1,800 and the other saying 2,200 calories were burned.

The whole project was funded through our Bags of Help Application which was from Tesco single use carrier bag charges (those 5ps add up) and managed by Groundwork.