Today, I took a day of work to help TCBC Ranger, Jon Howells with volunteer John adkins to prepare a site for oak respacing on Henllys LNR.
Tomorrow, children from Henllys Church in Wales Primary School will be coming down with Jon to  respace some closely packed oak saplings.
There is a wonderful oak tree which has been subjected to terrible arson from vandals on the LNR. Fortunately, some of the tree is still alive and it has been producing great saplings over the last 3 years. Most of these, however, are tightly packed and have been subjected to the  terrors of being pulled all over the place by brambles so lack great shape. 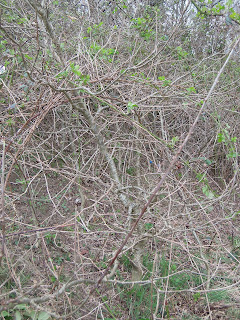 The idea is to dig up and respace some of these saplings to increase the effectiveness of this crop. The job for today was to cut out the brambles from around these saplings. Jon was using a brushcutter, while John and I used long-handled hooks. 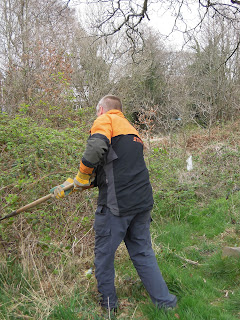 While performing this, as per usual, we uncovered a large amount of historic and fresh litter which filled one large bag. I also found a perfectly functional garden fork which will be donated to a local school group. 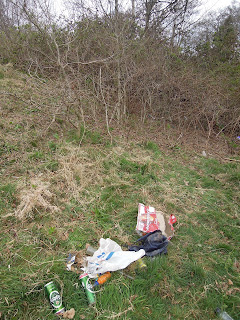 All in all, a great morning and best of luck for tomorrow. This is the first chance to bring a school group on the LNR, so thanks to Jon for organising it. Hopefully it will be able to help friends of Henllys LNR no end of good.
Posted by Friends of Henllys LNR at 16:34